Why the Name Thunder Wolf

Many years ago I went out on a vision quest. On the first evening, a small group of purple clouds had gathered on the horizon and lightning silently struck the cold Lake Superior waters. I have always had an affinity for lightning, and an infatuation with thunderbirds, but at that moment it felt like a personal message.

Many messages were revealed to me on that three-day outing, but it was immediately after that I began creating Thunder Wolf Healing Arts. In retrospect, I probably should have said ‘lightening’ instead of thunder.

I can’t remember why I went with thunder instead. But the sound is something that sticks with you. It is a voice that makes you pay attention. When we pay attention to things, we are given the opportunity to change them.

Lightning is powerful. It creates light where before there was darkness, which can be a metaphor for life. It is not the perfect analogy as lightning can be blinding, and can be brief. But sometimes brief moments of insight is all we need. It can take a while for ourselves to truly understand and adjust to a new reality just as it can take time to adjust to the light after being in darkness.

I know many people who love a good thunderstorm. There is something relaxing about the rain hitting the window panes and the grumble of distance thunder. Lightning cutting through the sky can be magical.

At the same time, lightning and thunder can also be terrifying and destructive. The truth is not always easy to face. It can be terrifying as it can rock the entire core of who you are or challenge the actions you took in the past. This can be very destructive, sometimes to the point that things can’t be the same and you’re forced to change.

I would like to interject that I do try to gentle with my clients. High drama is not how I’d want delicate and personal issues to be handled. I do know that in my own process of healing, the theme of upsetting realizations and destructive truths has been prevalent. These have brought on many rebirths.

It is not that healing does not have its soft side. Often times to get to sleep I will play thunderstorm sounds because I find it soothing. 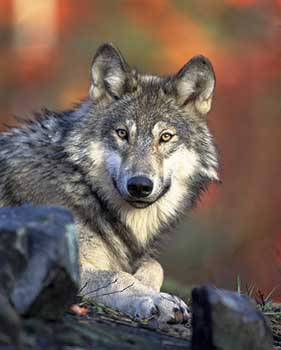 So what about the wolf part?  Often times you hear about the blood-thirsty killers, or perhaps the strong lone wolves. Wolves are often misunderstood. Much is said about wolves as if it’s fact when it’s not. While they do tend to be popular and either idealized or villainized, this is not why I have included it in my name. The wolf part is included because it is my main medicine, or totem. It defines a lot about me and what my path on earth is.

There are some life coaches who are passive and like to listen. I like to listen but I also like to help take an active approach when appropriate to help them to figure out actions to create what they want in their lives when they need it. There is a time to talk, and a time to act. But when it comes to taking action, it can be difficult to know which is the right way. Wolf is a pathfinder. Those with this medicine are often drawn to helping others find their way back to their own path giving them nudges and clues to which way is best.

While I do not offer it currently as a service, I have often come up with specific rituals for people to do to help them find deep healing in their own lives. Wolves have many rules and rituals on their pack so it comes more natural to someone that has their medicine.

On some level, I’d still like to do this mostly in healing contexts, but I don’t know if there is a demand or how I would structure it. I created a ritual for a woman who, in her teens, had been forced to abort their child. She felt the child was still near her and was haunted by grief. After performing the ritual I came up with for them they felt a sense of peace that they hadn’t for years. It was very rewarding and I still remember how life-changing it was for her.

Wolves also are teachers. At the moment I only offer two classes. In time, I’d like to build that up and offer more as I’ve always enjoyed it. Gaining and sharing knowledge is important to me.

So Why Not Go With Your Real Name?

One reason is that Thunder Wolf is a spiritual name I go by. I feel connected to it.

Most of my friends do not call me by my legal name and it honestly rubs me the wrong way when I hear it most times. I have thought about legally changing my name to something else.